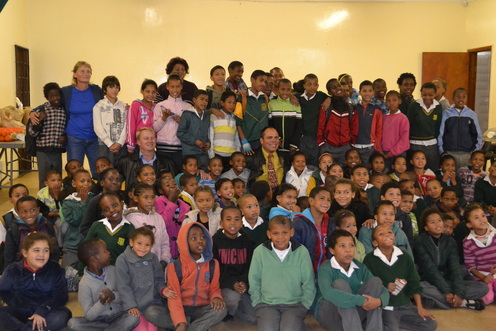 We celebrated Youth day on 14 June 2014 with the kids. The children were treated to a special appearance by SAPS members, Capt Wollie Fourie and Wo Pieter Koekemoer of police of Mosselbay. The kids had a lovely time, with some of them taking part in a dancing competition.  They enjoyed burgers, juice and sweets.
School clothes and stationery 2013 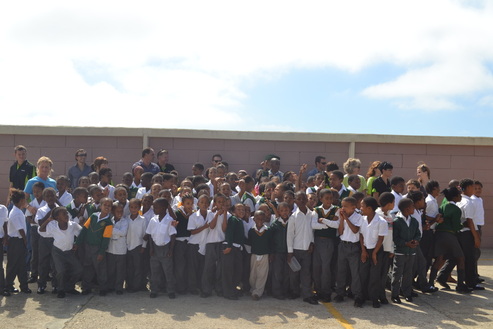 We bought school clothes and shoes for the 102 children and handed it over to them on 13 March 2013.  On the 14th March, Aurecon (George) gave each child their stationery for the year. The children also enjoyed a meal, sponsored by Aurecon, and prepared at the school. 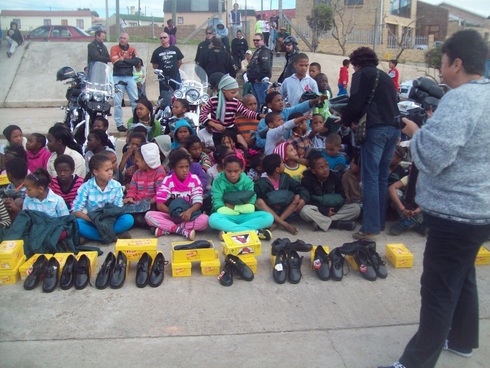 On 20 August 2013, the Harley Davidson riders of Mosselbay handed out winter school jackets to all the 102 children, and shoes to children who needed it.  McDonalds gave hamburgers to all the kids and we supplied cold drinks. 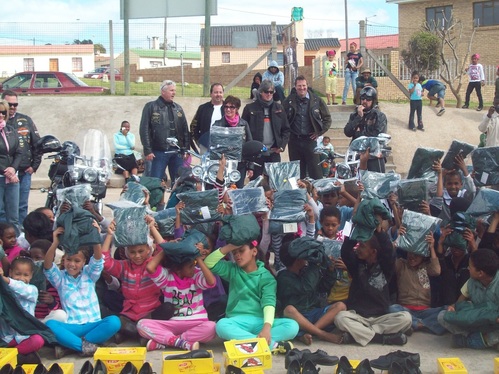 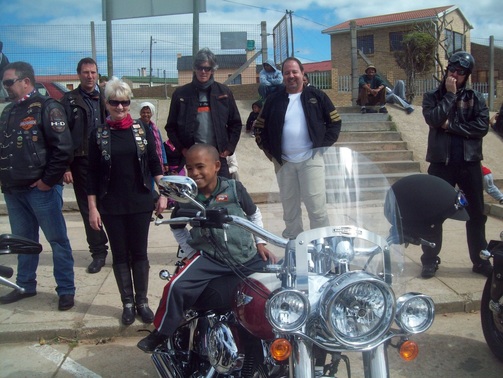 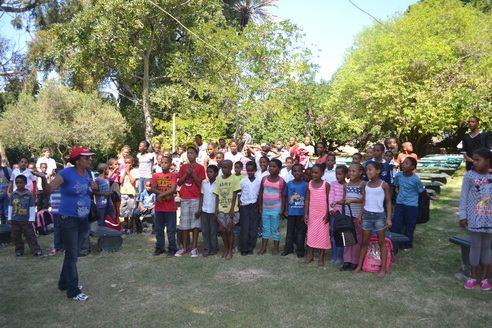 On 27 March 2014 we gave 86 children (not all the kids could come because of transport problems) an Easter egg hunt in the beautiful gardens of the Harry Giddy Park in Mosselbay.  We decorated the place with balloons everywhere. The children were put in groups and each group were given a basket. They had to look for the eggs that were hidden away by us. Pastor Johnny du Plessis of the Mosselbaai AGS kerk explained to them what Easter is all about.They behaved very well and were very attentive.  They couldn't wait to go "egg-hunting".
After all the eggs were found, they had a lunch - chicken drumsticks, potato salad and a roll and cold drinks. We also baked cupcakes for all the children. 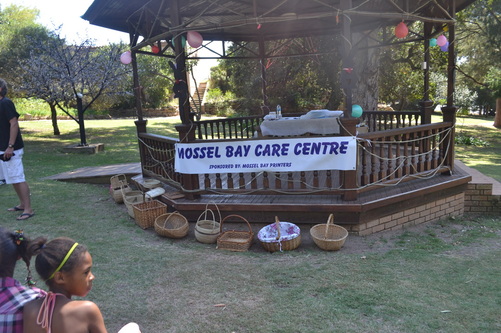 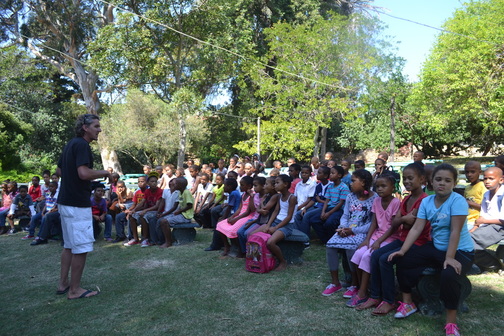 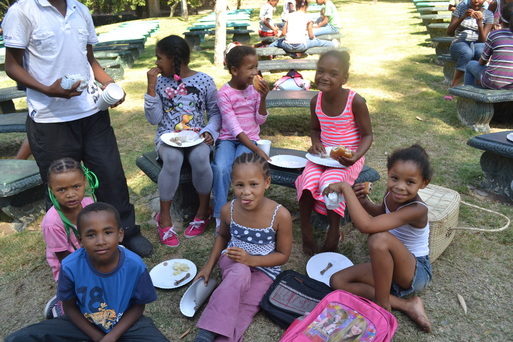 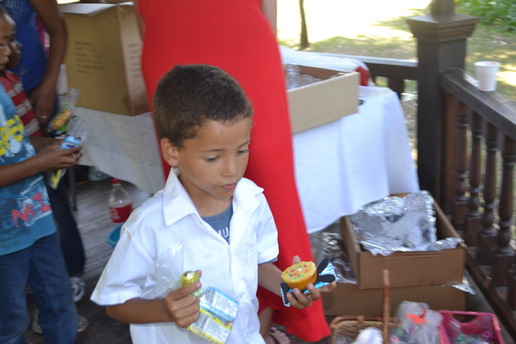 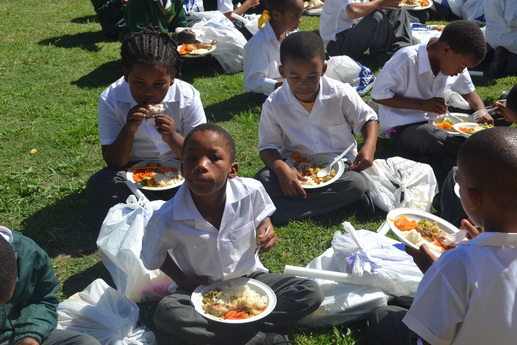 Enjoying their lunch at school
Heritage day 2013
On Heritage day, 24 September, we gave the kids a braai at the school. The enjoyed chicken, burger, sweets and cold drink.  Here some of the kids are playing on the jumping castle. 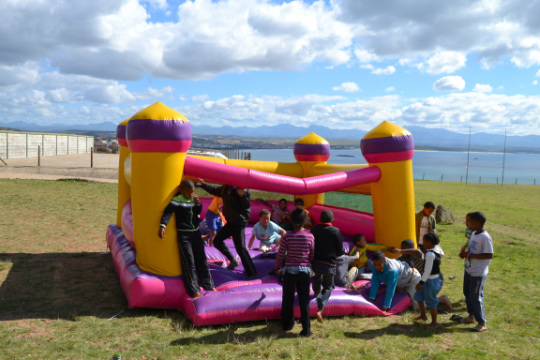 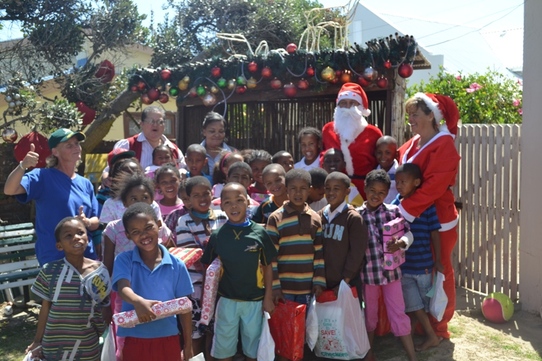 We gave these 100 kids a Christmas party on 6 December 2012.  They had so much fun and I'm sure they will not forget it for a long time.  We first took them to the Movies, where they had popcorn and chips.  Then they travelled by bus to Little Brak River. We had jumping castles and all 100 kids had a chance to ride on a quad bike. The quad bike rides were sponsored by the Garden Route Quad bikes.  Sweets, chips and colddrinks were handed out.  Then they had a very nice surprise visit from Ronald McDonald!  He chatted to a few of them. A very friendly American!  When he left, they all had a lovely lunch - KFC streetwise 1 (mash, gravy and chicken).  Santa Clause came with a small Mini bakkie and all the kids stormed him.  After all the gifts were handed out, they all left. 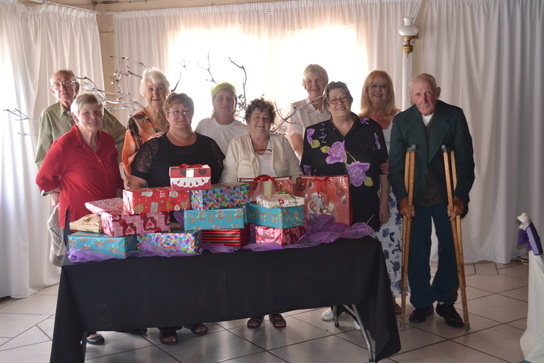 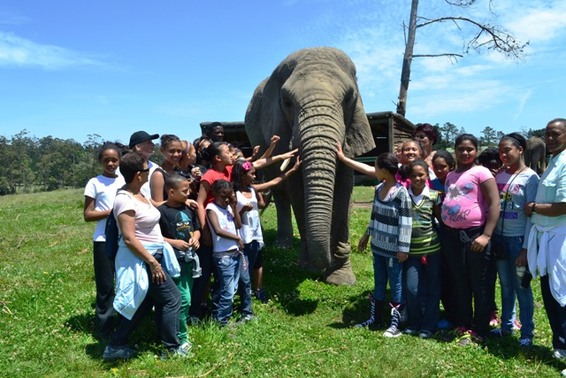 On Saturday 3 November 2012, we took the Top 20 students - the first 5 per grade, from grade 4 - of Ridgeview Primary School to a sponsored guided tour of the Knysna Elephant Park.  Wow! this was the highlight of these children's whole year.  This initiative of ours encourage the children to do well at school.  There were 19 girls and only 1 boy - this year the girls are the top achievers. We are very proud of them all.
They enjoyed a breakfast at the Wimpy before they went to the elephants, and afterwards all had a great time at Knysna Heads where we all had a picnic. 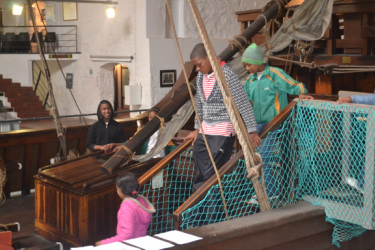 We took the 100 children to the Dias Museum on Heritage day. They received a short lecture and then they all had a chance to explore inside the museum and also to clim on the ship. It was an awesome experience for them. Afterwards they all enjoyed lunch in the garden and had some juice and sweets. 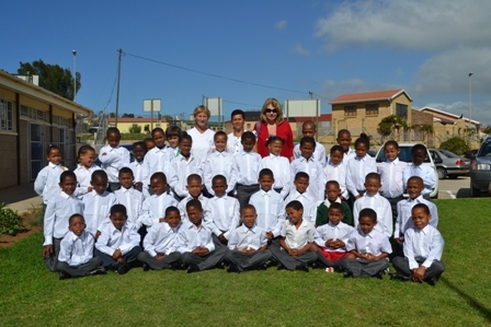 We bought schoolclothes and shoes for 39 children of Ridgeview Primary school.  We are in the process of buying for another 61 children their school clothes.
School clothes bought and handed over to the 61 children.
We are now collecting funds for school shoes and winter school windbreakers. We have now bought these. All the 100 kids now has their whole winter school uniform.

Hamburgers from McDonald's for a year 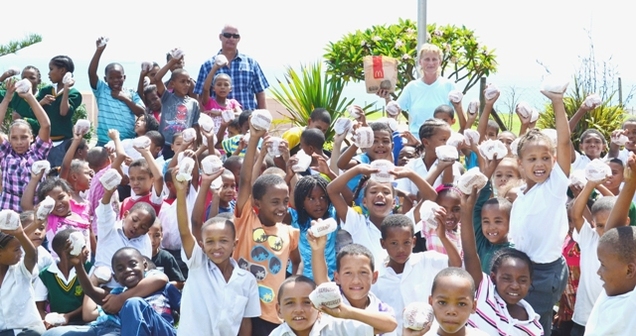 Mark Groenewalt, owner of McDonald's Mosselbay is giving hamburgers to the 100 children of Ridgeview primary school every last Friday of every month for this year. Here he is standing with the kids at the school. 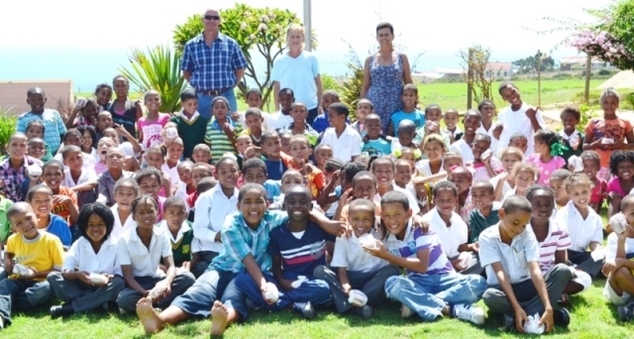 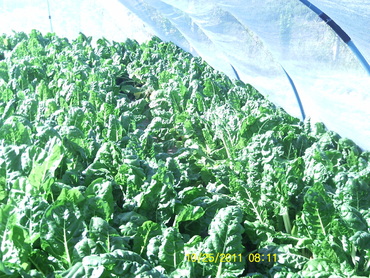 The first vegetable Tunnel at a school in Mossel Bay was erected at Ridgeview Primary School. A 1000 spinach plants were planted and the whole school (More than 800 kids) have eaten from this garden more than twice to date. This was our biggest project of 2011 and it was Sponsered by Lewis Stores Mossel Bay 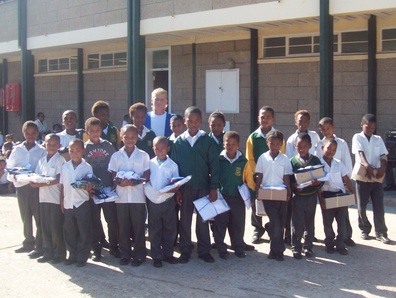 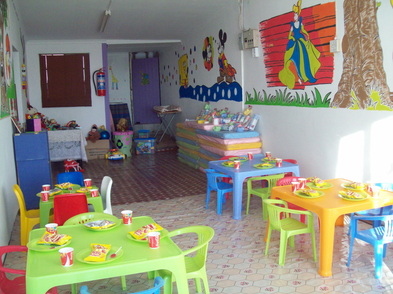 In 2009 we renovated Kiddies Corner Creche. We bought new Toys, matresses, Sheets, blankets, tables, chairs, plates, mugs etc. The Creche was re-painted, bigger windows put in, walls broken down to make rooms bigger and brighter. The ceiling was fixed and painted and carpets were put in. The toilet was fixed. Because of all these positive changes the owners, Mark & Patricia Baatjies were able to register the Creche. The first time she   contacted us for a food parcel, she had 18 toddlers. Today she has 42! We contacted CellC who made it all possible. We also give these toddles a Christmas Party every year since 2009. 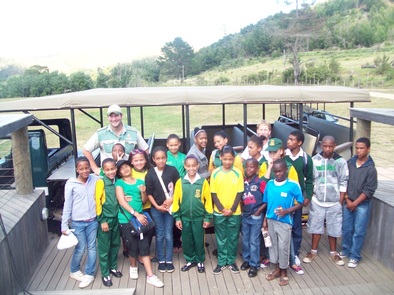 To motivate Children to do better at school, we spoil 10 academic learners and 10 Sport achievers. In 2009 they went on an Oyster catch trail. In 2010 they were given an educational speach by a Member of the NSRI. They then went on a boat trip to Seal Island, after that they enjoyed a guided tour at Jukani Wildlife. In 2011 they had a ride of their lives they went on a 4x4 Game Drive at Bottlierskop Game Reserve after they had Burgers and cooldrinks at Starts Restaurant. 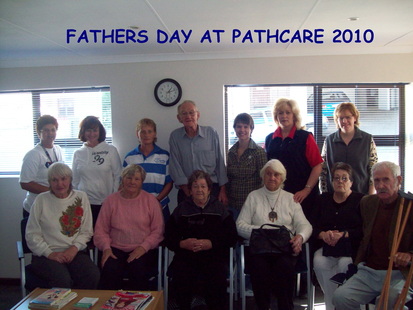 We buy food for 100 Children on a daily basis and we buy food parcels for 12 underprivileged old-aged Pensioners every month. We give them lunches on Mothers Day, Fathers Day and Christmas Day.